The Apartment of the Empress

Beyond the Emperor’s library, the visitor enters the north wing of the terrace built in 1755 which was successively the home of Louis, Dauphin of France and Maria Josepha of Saxony, Dauphine of France, Queen Antoinette before she decided to move into the new south wing of the terrace, and then King Louis XVI himself who enjoyed the continuation of the apartment inside.

Naturally this area was also the living quarters of the Empress of the First Empire. The current route visitors take through the apartment allows for a discovery in the opposite direction to what was ceremonial. As well as an antechamber and a picture gallery, it comprised a dining room, three lounges, the bedroom and her boudoir, as well as two more private rooms, the Salon de Thé (Tea Room) and the Salon de Déjeun (Breakfast Room).

With the exception of the Salon de Thé, the only room to have been restored to how it was in the Second Empire, all of the other rooms present an exceptionally standardised First Empire style. The rooms’ painted décor is the work of the art studios of Dubois and Redouté while the paintings hung on the walls are the work of Girodet, the father Dubois and the eldest Dubois. The most famous purveyors of the First Empire worked here under the guidance of architect Berthault, to whom we owe the creation of the Empress’ boudoir bathroom, a circular room where overhead lighting and draped wall hangings were combined to create a precious space.

During the Second Empire, the Empress Eugenie occupied these areas, reserving the Salon des Fleurs (‘flower lounge’) and the Salon Bleu (‘blue lounge’) for the imperial prince.

It is in this room with Antiquity-style décor that on the evening of 27 March 1810, just a few hours after her arrival, the future Empress Marie Louise enjoyed her first meal with Napoleon Bonaparte, in the presence of Caroline Murat, the Emperor’s sister.

During the Second Empire, the room was given back to the imperial prince, along with the Salon des Fleurs (Flower lounge) and the Salon Bleu (Blue Lounge).

With the exception of the moulded stucco ceiling created by Mongin in 1815, the renovation work on the room was completed in 1809. It is largely inspired by the Antiquity and by the East due to the Egyptian Campaign: stucco walls imitating yellow marble from the Antiquity, mahogany furniture produced by Jacob Desmalter, wall lights adorned with winged victories, a tiger skin rug and a chandelier from the Mont Cenis crystal Manufactory. On the ceiling, two winged lovers ending in a winding plant hold a bunch of grapes and a drinking cup in their hands.

In the room’s small compartments stand a number of antique vases and musical instruments (including an Egyptian sistrum). 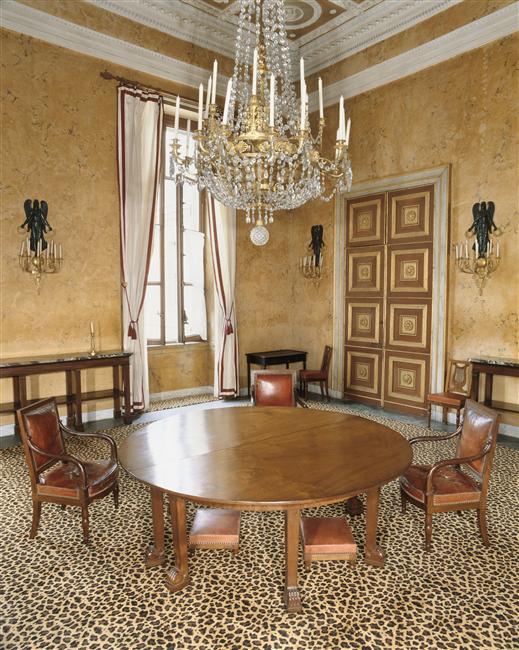 This room was supposed to serve as a presentation room for the empress Marie Louise. Following that, the plan was to hand it over to the King of Rome, son of Napoleon Bonaparte, thus giving rise to the creation of the “apartment of the children of France” (the Emperor hoped for more future heirs).

The aim of the warrior-themed ceiling was to teach the King of Rome the notions of virtue, courage and honour. The four compositions: the departure of the warrior, the fight, renown announcing the victory of the warrior, and the return of the warrior were added in 1814 with the aim of creating the apartment of the children of France. Jacob Desmalter produced the gilt wood furniture for the room in 1812.

The chairs are covered in blue watered fabric and feature motifs embroidered with gold thread, as do the wall hangings.

In the recess facing the windows, a statue produced by Charles Antoine Callamard representing Innocence warming a snake in her bosom was placed here in 1811.

During the Second Empire, this room was handed over to the imperial prince who used it as a study and games room. The empress Eugenie wanted her son’s living quarters to be alongside her own. 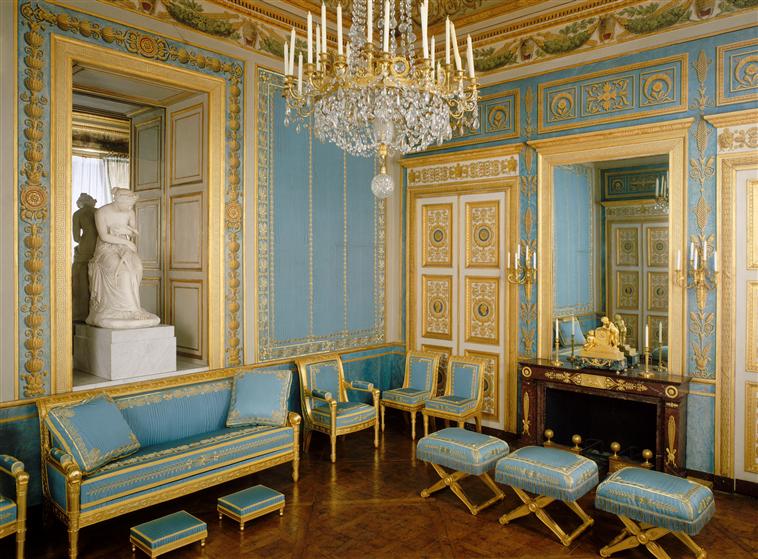 During the reign of Napoleon Bonaparte, this room served as a games room as indicated by the presence of a backgammon table, two quadrille tables, a bouillotte table and numerous chairs.

During the Second Empire, it was used as a bedroom for the imperial prince, the son of Napoleon III, who at the age of twelve and a half engraved the date 4 December 1868 into the marble pedestal table.

Botany was the inspiration of this room’s décor. The eight tables painted with flowers by Étienne Dubois were inspired by the studies of the famous flower painter Pierre-Joseph Redouté. They were introduced in 1810 for the arrival of empress Marie Louise at Compiègne.

The painted gilt wood furniture was produced by Jacob-Desmalter in 1809. The chairs, covered with tapestries produced by the Gobelins Manufactory, feature a small motif of bouquets on a lilac background chosen by the empress Joséphine herself. 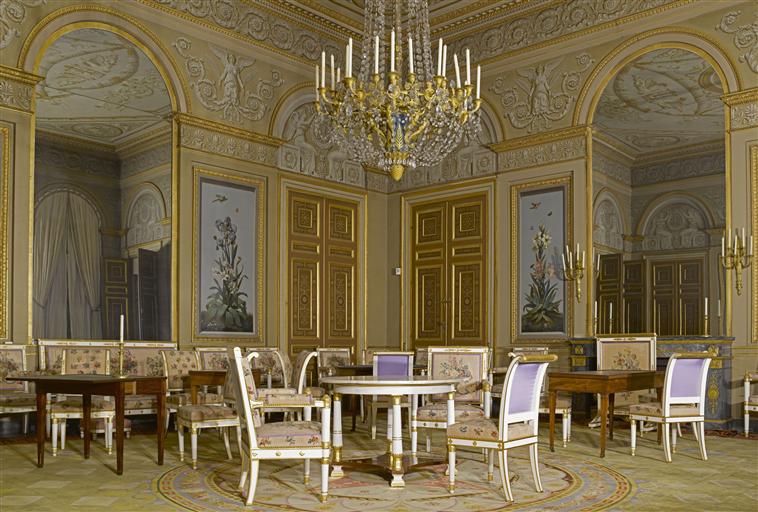 Salon des Dames d'Honneur (The Lounge of the Ladies in Waiting)

The presence of ployants is a clue that one is standing in the grand reception room of the empress. Arranged in line with traditional etiquette, they form a circle around the sofa where the empress and possibly the emperor would be seated.

This large lounge was decorated and furnished in 1809. It celebrates feminine virtues through its overdoors painted by Dubois representing the gods Minerca, Juno, Flora and Ceres.

The gilt wood chairs produced by Jacob-Desmalter are very varied: sofa, winged chairs, armchairs, chairs, ployants and stools. The armchairs were reserved for the emperor, the empress and ‘Madame Mère’ (the emperor’s mother). Anyone else, including the princes and princesses of the imperial family, could only sit on the winged chairs and ployants.

All of the seats were covered in green and gold brocade woven in Lyon in 1809 and decorated with J-shaped cornucopias for the empress Joséphine. Yet she never lived in this residence, with Napoleon Bonaparte marrying Marie Louise in 1810. 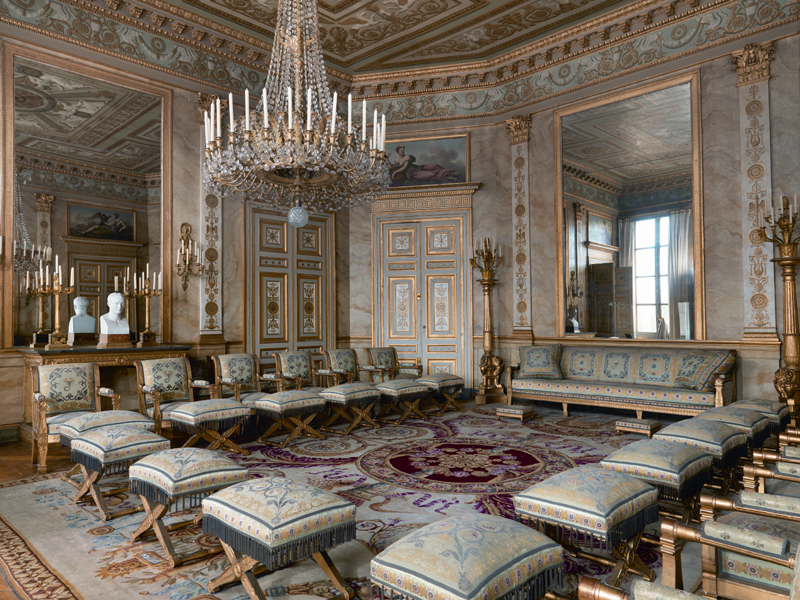 The empress’ bedroom as we see it today is how it looked when the empress Marie Louise, Napoleon Bonaparte’s second wife, stayed at Compiègne in 1818 on the occasion of her marriage. It has an adjoining bathroom which also serves as a boudoir.

The work carried out on this room by the architect Berthault was completed between 1808 and 1809. The entire decorative scheme (painted and carved décor) focuses on the theme of abundance and fertility: two winged figures stand either side of the bed adorned with cornucopias, another piece produced by Jacob Desmalter. Its gilded frame gives it an ethereal look thanks to its subtle combination with the white tones of the rest of the bed: underneath the matt exterior are a number of inner layers made up of wonderful light, almost transparent fabrics.

Following the damage suffered by this room during the Prussian attacks of March and April 1814, a number of new paintings were commissioned from Girodet: Aurore Chassant la Nuit (Aurora Hunting the Night) in the ceiling’s central section is accompanied by six painted panels surrounding the mirror and the fireplace, four of which are still visible today: Apollo, Summer, Autumn and Winter.

The bedroom has an adjoining bathroom which emanates a sense of purity thanks to its skylight. 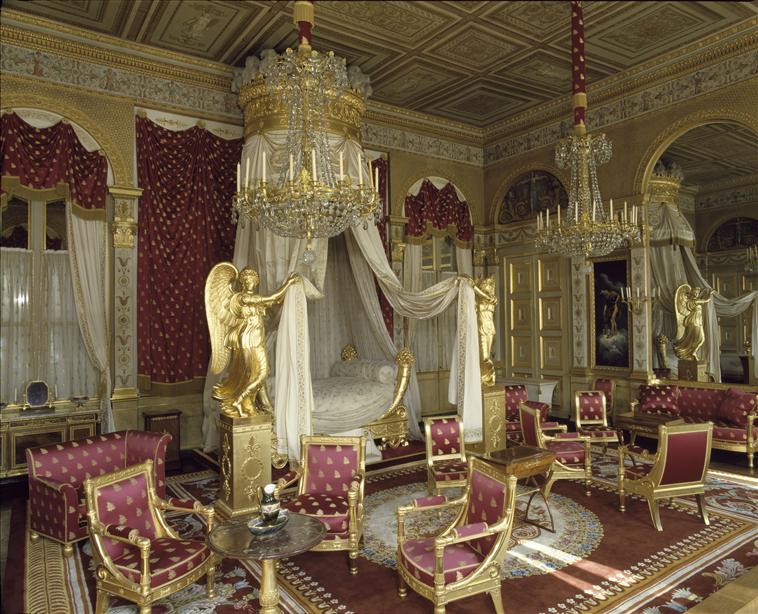 The Salon de Thé is the last of the rooms that make up the empress’ apartment. The furnishings still visible today (furniture, tapestries and artworks) date back to the Second Empire. It is in this room that the empress Eugenie welcomed her particularly honoured guests for a spot of tea.

The Empress personally oversaw the room’s decoration. A fervent admirer of Marie Antoinette and the 18th century, she chose the gilt wood furniture produced for the Grand Cabinet de la Reine (Queen’s Grand Cabinet) in Saint Cloud. A lover of Chinese art and intrigued by the East, she added to the room Chinese lacquered furniture and oriental tapestries, including those of the Chinese Prince woven at the Beauvais Manufactory, and that representing Turkish dress produced at the Gobelins in 1774.

The room’s décor gave her the opportunity to express her varied tastes, choosing to combine prestigious historic furniture with contemporary, functional and more bourgeois furniture like the upholstered banquettes decorated with trimmings (gold woven thread) and the nesting tables.

It is worth noting that this room was once known as the Salon de Musique (Music Room) due to the piano and the harp which were kept here during the First Empire, though these were removed at the beginning of the Bourbon Restoration. The room was renovated between 2008 and 2012 thanks to the support of the company Uranie International (located in the Oise department of France). The work on the architecture and the repairing of the artworks enabled the room to be restored to how it looked at the end of the Second Empire, in around 1869. 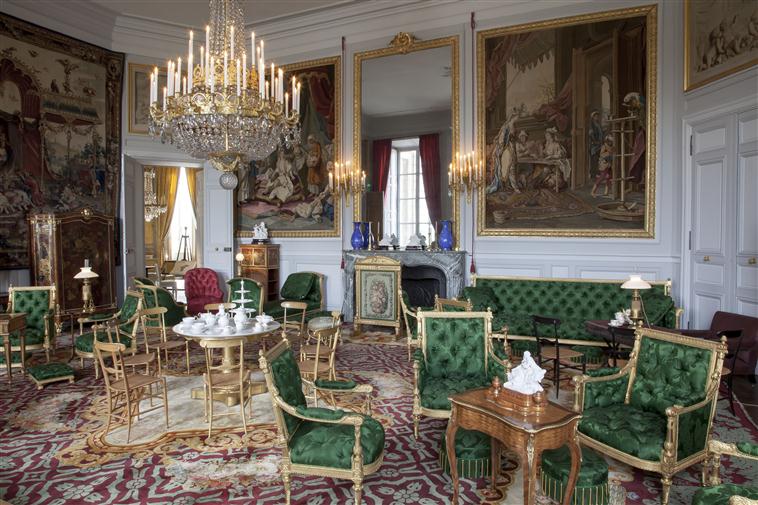 Situated between the Emperor’s library and the Empress’ Tea Room, the Salon de Déjeun is set back slightly from the other rooms of the Empress’ apartment, making it more intimate and private. It has been restored to its state during the First Empire.

It is here where the sovereign was served her first meal of the day. The white-painted wooden furniture was made by Jacob Desmalter and added to the room in 1809. Its simplicity is combined with a profusion of textiles which cover the room and add light and warmth thanks to their daffodil yellow colour and the blue border that surrounds them. 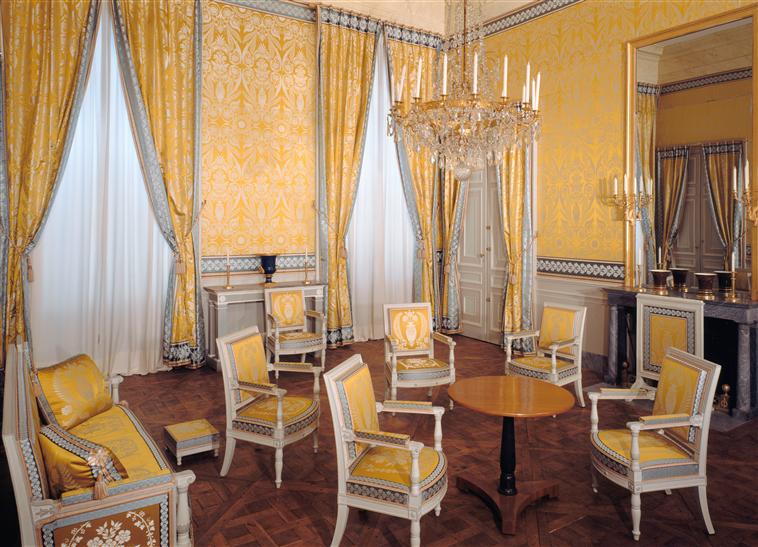