The Emperor's Apartment
Occupied by a number of French monarchs, from Louis XV to Napoleon III, the Emperor’s Apartment is located at the heart of the Palais de Compiègne. It occupies the entire central part of the façade which looks out over park and stretches from the dining room to the library.

Occupied by a number of French monarchs, from Louis XV to Napoleon III, the Emperor’s Apartment is located at the heart of the Palais de Compiègne. It occupies the entire central part of the façade which looks out over park and stretches from the dining room to the library.

A major modification was made to the layout of this apartment. The king’s Chamber was initially located at the heart of the ensemble, in the centre of the façade noticeable for its colonnaded pediment. Napoleon Bonaparte however chose to move his Chamber to another room, the former gunpowder room of Louis XV, while the king’s Chamber was transformed into a huge reception room known as the Salon de Famille (Family Room).

The decoration on the walls and ceilings of the Emperor’s apartment for the most part date back to the end of the 18th century and the First Empire. As for the furnishings, these were restored to how they looked during either the First or the Second Empires. The Cabinet du Conseil (Council Room), where the king took counsel, is the exception. This room is presented as it was in the 18th century and serves as a reminder that the Palais de Compiègne was once a place from which royal power emanated.

Located at the cross roads between the apartments of the King and Queen, in the 18th century this room served as the antechamber to the queen’s apartment as well as the room where the Grand Couvert (public feast held by the king) would be served.

During the First Empire, the room became the Emperor’s dining room, while also being used as a place for entertainment.

Napoleon Bonaparte preserved the 18th century décor, which notably included the trompe-l'œil grey tones imitating bas-reliefs inspired by the Antiquity and based on the theme of the pleasures of the table. Produced by the painter Sauvage, the painting above the chimney breast represents the poet Anacreon: at the heart of the vineyards, he praises love and wine. Finally, thanks to their shape and decoration, two white marble vases are another echo of the Antiquity style so present in the painted decoration.

To furnish the room, new mahogany furniture was commissioned from Jacob-Desmalter. Delivered in 1807, it is modest and functional. The multifaceted table is made up of four rectangular sections and two semicircles, making its shape easily modifiable. Thanks to its location, the room is versatile: during the Second Empire, for example, a pop-up theatre was often set up in this room, where numerous performances took place. 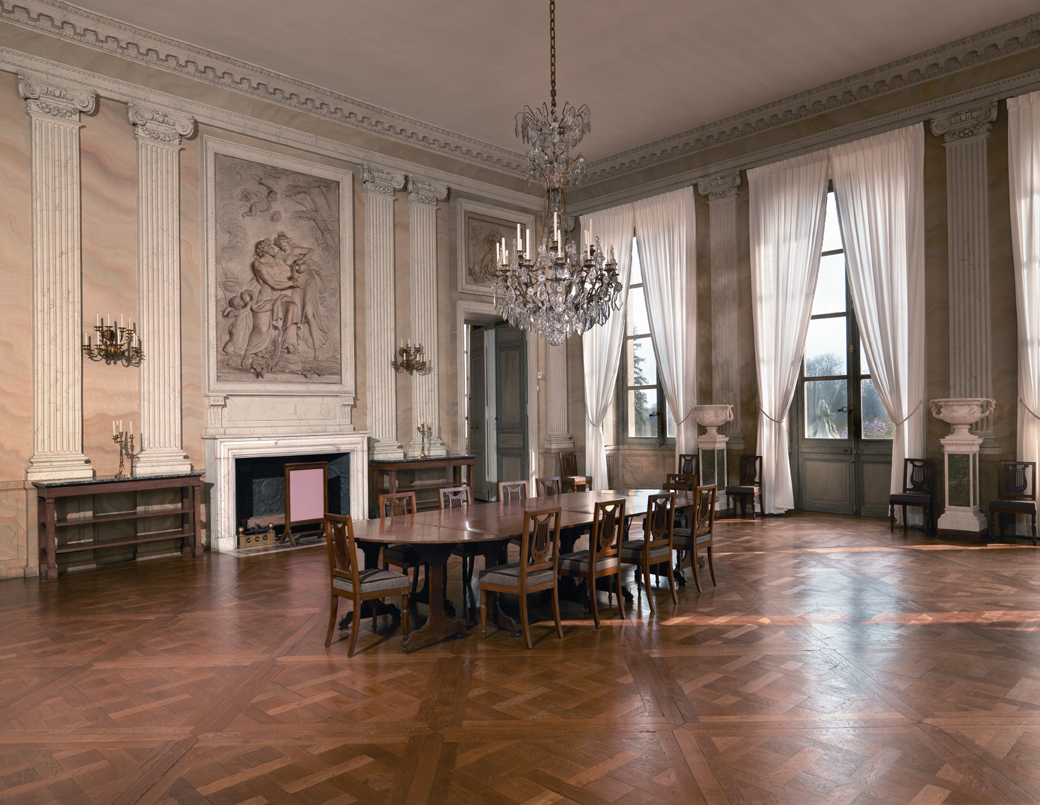 During the Second Empire, the Palais de Compiègne hosted the famous Séries every autumn: Napoleon III invited the court, Le tout-Paris (the fashionable and affluent elite of Paris) and the European elite for a week of entertainment. The Salon des Cartes is symbolic of the superior and modern court life of the time.

The Cabinet des Nobles (Cabinet of Nobles) under the reign of Louis XVI, this room preceded the king’s Chamber. The Salon des Grands Officiers (lounge for major officials) during the First Empire, it was refurnished during the Second Empire. During the Séries, this was the place where the emperor’s presentations took place as well as other forms of entertainment offered to guests. Other features in the room include a player piano and a miniature billiard table. Charades, card games, dances and theatre performances were also all held here.

The maps of the captaincies of hunts, representing the Compiègne forest, have been on display in the room since the First Empire. In 1855, the room’s décor was updated, with the room’s furnishings dating back to 1863. The architect Ruprich-Robert designed the furniture, including chairs covered in 18th century Beauvais tapestries on the theme of rural entertainment. Finally, new crimson red curtains and Sèvres vases completed the ensemble. 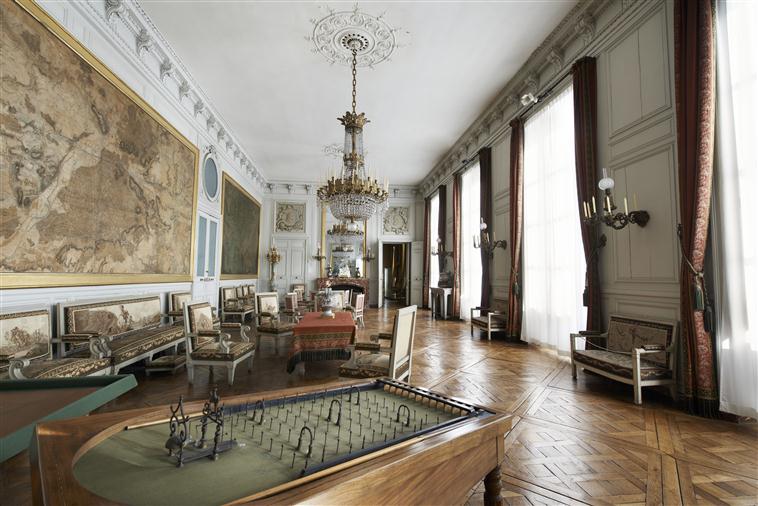 Formerly the king’s Chamber, the Salon de Réception is the most central room in the monarchical apartment. It was during the First Empire that it was transformed from a bedroom to a lounge.

All on one level and edged by the terrace, the former Chamber of the king is a central room in the palace, around which the façade and also the general layout of the park is organised.

Boasting the highest ceiling in the palace, this room still features 18th century décor which includes the high wall panelling punctuated with Corinthian pilasters and the spaces above the doors painted by Sauvage.

Napoleon Bonaparte refused to have his bedroom in this room, instead choosing to move it two rooms away from here.

Designed to be a throne room, it became the Princes’ lounge and subsequently the Family lounge. All of its furnishings were renewed during the Second Empire, in golden yellow or celadon green tones. Elements from the First Empire were also incorporated, including the gilt wood console produced by Jacob-Desmalter and the fireplaces decorated with lions.

All of the room’s furnishings reflect the importance of modernity to court life and the search for comfort typical of the Second Empire: light chairs and sofas with wheels that can be moved around easily, as well as soft and elegant upholstered seats, like the confidante chairs for two or more people, inviting guests to engage in conversation. Court life at Compiègne was relaxed and etiquette reduced to a minimum, leaving guests free to fill their days how they pleased. 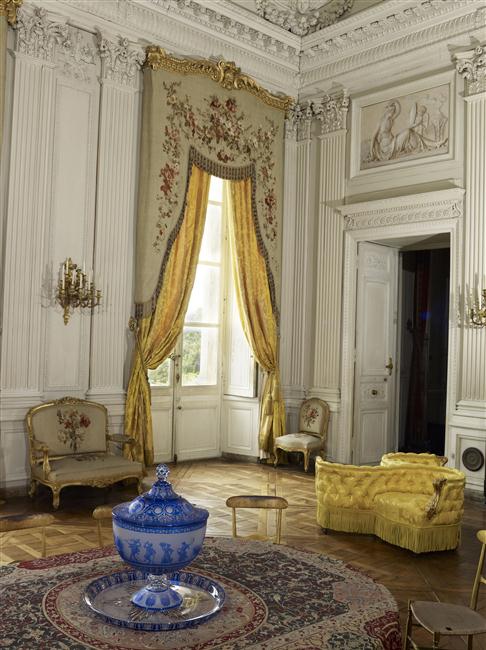 Bearing witness to the political role played by Compiègne during the 18th century, the Salon du Conseil played host to political debates. Like Versailles and Fontainebleau, Compiègne was indeed a place where royal power was exercised, with a number of royal decrees signed at the castle.

The vocation of this room immediately adjacent to the king’s Chamber was political under the Ancien Régime. Indeed, the king met with his Council just as much in Compiègne as he did in Versailles and Fontainebleau.

The general decorative scheme of the room is based on the glorification of the military actions of the Bourbons, by looking back over the success of the two previous reigns while also evoking those of the present reign. The objective was to look back over the feats of King Louis XVI in line with historical tradition, while also highlighting recent victories. Representing the Crossing of the Rhine, the large fresco celebrating the military glory of Louis XIV was done in “wheatgrass juice” and produced at the Gobelins Manufactory between 1682 and 1684. The former kings of France keep watch over the decisions made by the council, whose portraits can be seen above the doors. The Council Room also featured eight doors painted by Cardin, six of which are still in use (two of them are between the windows).

During the First Empire, Napoleon had his bedroom in this room. This change to the apartment’s layout was a breakaway from monarchical tradition welcomed by the Emperor.

Adorned with symbols of the new political order, the Emperor’s Chamber embodies the regime’s power.

The Emperor’s Chamber features incredibly homogeneous décor and furnishings, which were the result of a comprehensive and fast-paced commission. They are symbolic of popular taste during the First Empire. The art studios of Dubois and Redouté as well as the painter Girodet carried out the room’s painted décor in 1810. The gilt wood furniture and cabinetry is the work of Jacob-Desmalter and the Emperor himself chose the Bidault landscape that hangs between the windows. The splendour of the room comes from the alliance of crimson red and gold seen in the wall coverings, curtains, bed covers and chairs adorned with symbols of the Empire (oak leaves, stars and bees).

A fire here in 1919 destroyed the room’s decorated ceiling, painted by Girodet in 1822. 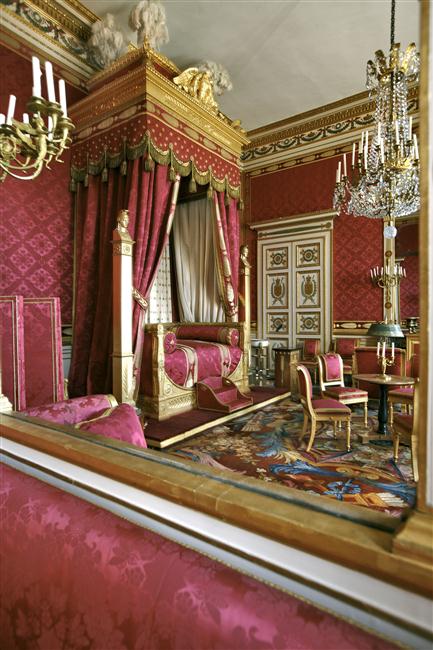 This room is the link between the ceremonial rooms and the Small Apartments of the Emperor. It is here where Napoleon Bonaparte liked to study at his magnificent and ingenious mechanical desk created by Jacob-Desmalter.

The furnishings, introduced homogeneously between 1808 and 1810, include a varied range of furniture which is both rich, like the gilt wood chairs, and functional, like the folding mahogany tables, rolling ladders and the mechanical bureau of the Emperor.

The décor is designed completely in line with the room’s function. In the corners of the room, allegories by Dubois and Redouté feature all of the branches of knowledge and human reflection. They enhance the ceiling painted by Girodet in 1815: Minerva, surrounded by Apollo and Mercury, places wisdom at the source of all knowledge alongside eloquence and poetry.

The works currently kept in the library are not those that were owned by the Emperor as the monarch’s library was dispersed in 1889. These works were brought here in 1902 by the Bibliothèque Nationale (French national library) following the visit of Tsar Nicolas II to Compiègne. 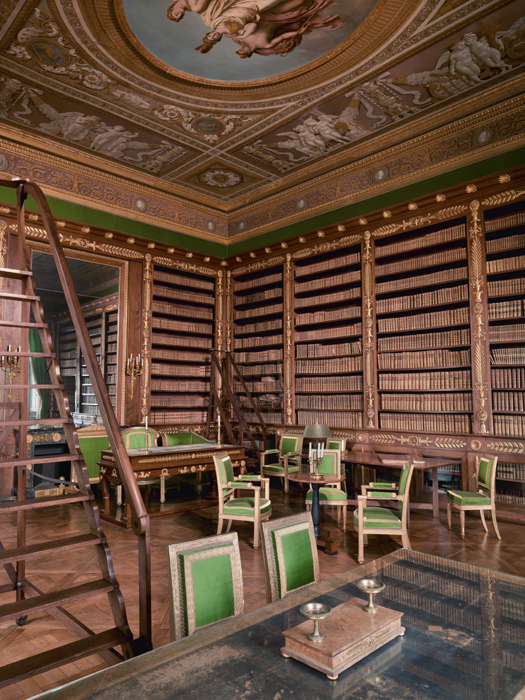